Thrissur Pooram Festival - This most spectacular Pooram Festival is held in the Malayalam month of Medam (April- May) in Thrissur, attracting large number of people. The main features of this festival are two lines of 13 richly caparisoned elephants facing each other in Vadakkumnatha temple grounds, a competition of swift and rhythmic changing of brightly colored and sequinned parasols called as "Kudamattam", traditional orchestra called "Pandimelam" and spectacular fireworks. 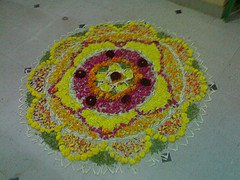 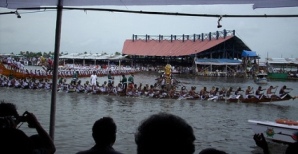 Aranmula Boat Race - Another popular Boat Race is held in August-September during Onam festival, near Pampa Lake in Aranmula near a temple dedicated to Lord Krishna and Arjuna. About 30 snake boats participate in this race. The main features of this Boat Race are the golden lace at the head of the boat, the flag and the ornamental umbrella, and the oarsmen with white Mundu and turbans, singing traditional boat songs, exhibiting true meaning of friendly rivalry.

Arattu Festival - This famous festival is celebrated in Trivandrum in the famous Padmanabhan Temple, as the closingday of 10-day festival. It is celebrated twice a year - once in October-November and the second time in March-April. After performing the rituals by the ex-Maharaja, the idol of the Lord taken out on procession on the beautifully ornamented elephants, to the Shanmugham Beach for a ceremonial dip in the sea and slowly returns to the temple, marking the end of the festival.

Attukal Pongala Festival - This is one of the world famous festivals Kerala India . It is a festival for the women. Now Attukal Pongala has entered into the Guinness Book of Records for the largest number of women gather in the world.  For more information click here.

Thiruvathira Festival - This is a festival for ladies, celebrated based on an age-old tradition, in the monthof Malayalam month Dhanu (December-January), with fasting, praying, and visiting temples of Shiva, and prayingto get good husbands by the unmarried girls, and the married women pray for their husbands' well-being. The mainfeatures of this festival are Oonjalattam (swinging)and Thiruvathirakali, also called as Kaikottikkali, performed by the ladies. Kerala Festival Vishu

Christmas is widely celebrated in Kerala.