Kannada weddings are the weddings of Kannadiga, the people of Karnataka. Kannada Hindu weddings are based on their regional cultures and traditions.

There are a number of pre-wedding rituals performed by the Kannadigas. They are not colourful, but are based on the culture and faith on God. They do differ from region to region, as per the traditions. 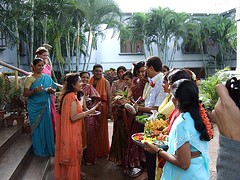 In Karnataka, the pre wedding rituals commence with Nischay Tamulam or Fixing of the Alliance. After the horoscope matching a date for the Engagement of the wedding, called Nischay Tamulam, is arranged. The parents of both the bride and the groom agree for the marriage of their children in such a ceremony. The parents of the boy go to the bride's home and present her a sari, blouse piece, coconut and fruits. The bride's parents give the boy a dhoti, coconut and many fruits. A priest recites mantras.

Both the bride and the groom perform this ritual in their respective houses, to ensure the marriage takes place uninterruptedly.

In a typical Kannada wedding, the groom pretends of leaving for Kashi as he is unable to find a suitable bride. Then his maternal uncle shows him the bride he has chosen for him. Seeing her, the groom cancels his journey and agrees to marry her.

On the wedding day, the mandapa and the hall are purified by doing pooja. The bride's father receives the groom by washing his feet, which is called Var puja. He makes him sit on the designated place in the mandap and then the bride too is brought there to sit next to him. In a traditional Kannada wedding, the bride wears a navari or a nine-yard sari and green glass bangles, adorned with fine jewelleries. The groom wears a silk dhoti and pitambar. Chanting of holy mantras, they exchange garlands.

The bride's father gives away her daughter to the groom, by placing a coconut and betel over their hands and pouring holy water. This is called Dhare Herdu custom. The groom then ties the mangalasutra around his bride's neck, and holding her hand, walks seven rounds around the holy fire.

After witnessing the wedding, the guests are led to the hall where a grand feast is arranged. The food is served in banana leaves.

Post-wedding Rituals of a Kannada Wedding

After the lunch, the bride is escorted to her marital home with her husband where she is warmly welcomed by his parents. For this, a vessel filled with rice is kept at the entrance of the house and she is asked to knock it inside the house, with her right foot, and then to enter the house. This custom is calledGrihapravesha.

The groom decides a new name for his bride and inscribes it with a ring on a plate, containing rice.

The bride's parents visit there and take the newly wedded couple to spend few days at their house. Then the groom's family goes and bring them back to their house.

A reception is organized in a banquet hall by the groom's family,for the relatives and friends,to introduce the newly married couple and wish them for a successful marriage. Mouth watering delicacies are served for this function.