Tamil wedding is usually simple and well attended by close as well as distant relatives. These days many people take the service of wedding planners who arrange everything for conducting Indian marriages.

While fixing the date of marriage, the months of Aashad (July 15th to August 15th), Bhadrapad (September 15th to October 15th) and Shunya (December 15th to January 15th) are avoided since these months are considered inauspicious for Tamil weddings. There are a number of pre-wedding rituals performed by the Tamilians,as part of their culture. They are not very colorful, but are based on the complete faith on God. 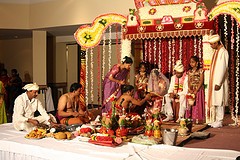 On the previous day of the Tamil wedding, married women from both the sides sprinkle water on the clay pots filled with nine varieties of grain. During this ceremony, the others present sing traditional songs to the accompaniment of music. The next day (the day after the wedding) when the grains sprout, these pots are immersed in a pond so that the fish in the pond may feed on the grains and bless the newly-weds abundantly.

It is customary to invoke the blessings of the family deity to ensure smooth function of marriage ceremonies, which is performed one day before the wedding. Both the families pray to the deity.

It is customary to invoke the blessings of the family deity to ensure smooth function of marriage ceremonies, which is performed one day before the wedding. Both the families pray to the deity.

On the morning of the Tamil wedding, one day before the wedding, the groom and his family arrive at the wedding hall and are welcomed ceremoniously. Bride’s brother smears the forehead of groom with the paste of sandalwood and kumkum,and garlands him. They are welcomed with a tray of offerings such as flowers, paan supari, and fruits, by the bride's family. The bride's mother offers a sweet dish to the groom's parents and performs aarthi,followed by breaking coconut.

Few Brahmins are honoured with gifts and sweets and their blessings are sought for Tamil wedding. In Indian marriages, they are honoured with the belief that they represent the souls of the ancestors of the two families.

This is the arrival of groom with his parents and relatives and formal engagement before the priest is held. Ganesh pooja is performed.

The groom's family gives a sari to the bride, which she wears for the wedding. The pallav of the sari is filled with fruits, paan-supari, turmeric, kumkum and coconut. A garland of flowers is tied around her waist. Aarati is also performed for her.

Mangala Snannam - the auspicious bath by the couple at their respective homes.

These are colorful rituals with full of fun. The groom plays a drama wherein he announces that he is going to Kashi and he is not interested in marriage and taking the household responsibilities. The bride's father requests the groom to accept his daughter as his spouse, then he returns to the mantap where he is received by his bride.

They are given the garlands to exchange, but the fun is that when the groom extends the garland to put on the bride, she moves away. Only on the third time he succeeds and then the couple are offered an Oonjal (swing) to sit on. Sumangalis (married women) perform rituals to ward off evil eyes on the couple to be married. Small balls of cooked rice smeared with turmeric and kumkum are dipped in milk are kept ready. The ladies sprinkle the milk on their feet, and the rice balls are thrown in four directions. Then bride and groom are given a mixture of banana and milk, amidst the oonjal songs.

The bride’s sari is tied with the groom’s scarf. Pandit ties the right hands of the couple with a thread, which symbolizes the lifelong bond. The bride and groom seek blessings from God to strengthen their union. The bride's mother applies kajal in the groom's eyes, and father washes his son-in-law's feet. The bride sits on her father's lap with a coconut in her hands. The bride and her father offer the coconut to the groom while the bride's mother pours water over the coconut thus symbolising the 'giving away of their daughter.' At this time, the groom's parents gift the bride a nine-yard sari and a blouse to be worn for next moment, the auspicious occasion of tying the mangasultra.

The priest and relatives bless the mangalsutra or sacred thread and hand it to the groom. He ties it around the neck of his bride with two knots. The groom's sister ties the third knot amidst the drums and music. The three knots symbolise the marriage of the mind, spirit and body. The groom takes the bride's right hand in his left hand and leads her around the sacred fire seven times, signifying seven sacred vows of marriage, after which, they seek the blessings of all elders. The parents and relatives of bride and groom exchange gifts,followed by a grand feast.

After the feast, (Indian wedding food) the bride is escorted to her husband's house, where she is welcomed by aarati, and a grand lunch is served at this occasion.

Reception for a Tamil wedding

A colorful reception is arranged in a hotel or wedding hall, for the guests to meet the newly wedded couple, to convey their best wishes to them and their families. This is usually not a traditional Indian wedding food.