Dasara Festival (Dussehra) is one of the popular and enthralling festivals of India celebrated with great joy and enthusiasm. It is also known as"Vijayadashami". This festival is celebrated to mark the victory of good over evil and victory of gods over demons. Dusserah (Dasara) literally means the tenth day. It marks the end of the nine days of Navaratri.

The first nine nights are spent in the worship of goddess Durga and hence these nights are known as Navaratri. This festival falls in the month of Ashwin (Sep - Oct) according to Hindu calendar. The tenth day of the Dusserah is celebrated in honor of Goddess Durga Devi. 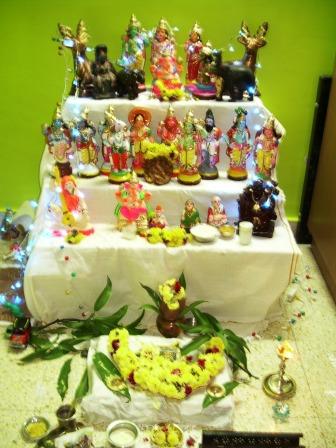 According to Hindu mythology, Lord Rama, the eighth incarnation of Lord Vishnu killed Ravana, the king of Lanka on the tenth day of their battle in Satya Yug and rescued his wife, Seetha from Lanka thus saved her honor. Hence that day of victory came to be known as Vijayadashami or the Victory on the Tenth Day.

Dasara is also believed to have marked the end of the exile and banishment of the Pandava princes in the Hindu epic Mahabharata and their return with their weapons to reclaim their kingdom from Kauravas.

In Southern India, the festival of Navaratri which culminates with Vijayadashami commemorates the legend in which the Goddess Durga, also known as Chamundeshwari or Mahishasura Mardini, vanquishes the demon Mahishasura, an event that is said to have taken place in the vicinity of the present day city of Mysore in Karnataka. Goddess Durga fought with Mahishasura for nine nights, and killed him on the evening of the tenth day, or the day of Vijaya Dashami. Hence this day is celebrated as the day of victory to rejoice about Durga's triumph over the demons led by Mahishasura.

Vijayadashami is also the day of the Goddess Saraswati,the deity of knowledge and learning. People worship weapons and vehicles on this day. It is an auspicious occasion for children to commence their education in classical dance and music, and to pay respect to their teachers.

In South Indian states of Tamil Nadu, Andhra Pradesh and Karnataka, families decorate dolls on artificially constructed steps called “Bommai Kolu” and prepare a rangoli or an elaborate floor decoration with lamps and flowers. The whole set up is put on the very first day of Navaratri. Women traditionally exchange coconuts, clothes and sweets as gifts. In Tamil Nadu, Dusserah is celebrated for 9 days. The first three days of the festival are dedicated to the worship of Lakshmi, Goddess of Wealth and Prosperity, the next three days to Saraswati, Goddess of Learning and Arts and the last three days to Shakti, Goddess of Power and Might.

In 2019, South India celebrates Saraswati Puja and Ayudha Puja on October 7th this year (also called as Navami Durga Puja) and Vidyarambham (Dasara, also spelled as Dassara, Dussehra) on 8th October, according to the Hindu calendar. On this auspicious day, the children are initiated into writing in Kerala.

Mysore of Karnataka is synonymous with the Dasara festival where it is celebrated with great pomp and glory since centuries. Mysore Dussehra festivities have become an integral part of the culture and life in Mysore so much that Dusserah has become the state festival of Karnataka.

During the ten day long Dusserha festivities the city buzzes with tremendous activity. House, shops and important buildings in the city are decorated and illuminated for the period of the celebrations. The well-known musicians of Karnataka and from other regions perform in front of the illuminated Palace.The Royal Palace of Mysore is open to the public and the royal throne is displayed. The State Government arranges music, dance, doll shows and folk dance performances. Also Wrestling, sports competitions, exhibitions, food and film festival are organized as part of the event.

During Dasara festival, special religious ceremonies are held at different temples in Mysore especially in the Chamundeshwari Temple on top of the Chamundi Hills. The highlight of the colorful event is the Vijayadashami procession held on the tenth day. This state organized procession involves carrying of the idol of Goddess Chamundeshwari kept in the golden howdah on top of a decorated elephant. The procession begins at the Mysore Palace and ends at the Banni Mantapa grounds, after traveling a distance of about 2.5 miles. Live performance  of folkartists and musicians in the procession and the stunning display of fireworks mark the grand finale.

If you ever get a chance to be in India during Dasara Festival don't miss this fascinating festival.