There are many Tourist Places in Mysore, Karnataka, India and is one of the top visited destinations of India. The majestic Mysore city was once the residence of the Maharajas of Mysore. This city of palaces and parks is the ‘cultural capital’ of Karnataka. Mysore is also known for sandalwood, rosewood, teak carvings and furniture. The Mysore Silks are known for their excellent quality and everlasting luster.

What are the Top Tourist Places in Mysore

The famous Dussehra festival is celebrated with great pomp and show. The best time to visit Mysore Karnataka India is during September-October when the glorious Dussehra Festival is held lasting for 10 days.

The tenth day the Royal procession on decorated elephants is held on the reminder of the pomp and splendor of a bygone era. Dussehra is one of the main attractions of Mysore, Karnataka, India. 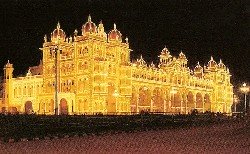 This palace is one of the major attractions of Mysore. The palace is built in Indo-Saracenic style, designed by an English architect, with ornate domes, archways, turrets, colomnades and sculptures. It is an abode of exquisite carvings and precious paintings from all over the world.

It was formerly the official residence of Maharajas of Mysore. The palace is illuminated on Sundays and pubic holidays. The Wodeyars royal throne made of gold, embellished with precious stones and jewels is also there. Tourists from all over the world come to see the palace at Mysore Karnataka India.

Other Things to see in Mysore, Karnataka, India

Jaganmohan Palace –This palace, one of the most beautiful buildings of Mysore, was built by Maharaja Krishnaraja Wodeyar in 1861. The Art Gallery is housed in the palace. Some of the most valuable collections here are the paintings of renowned artists like Travancore ruler Raja Ravi Varma and the Russian painter Svetoslav Roerich.

Lalitha Mahal Palace - This charming two-storied Palace, designed in European-Classical style, was built by Maharaja Krishnaraja Wodeyar in 1931 to accommodate special guests from overseas. The palace has now been converted into a luxurious heritage hotel.

Brindavan Gardens - Built across River Cauvery and below Krishnaraja Sagar Dam, by Sir Mirza Ismail. Visiting Brindavan Gardens in the evening is a feast to eyes because of the illumination and fountains.  In the evenings, Music Fountain Show is available. It is about 21 kms away from the Palace.

Krishnarajasagar Dam - This massive dam was designed and constructed by the famous architect M.Vishwesaraya in 1932. It has a length of 2621 meters and a height of 39 meters. It is situated near the confluence of Kaveri, Hemavathi and Lakshmanathirtha rivers.

The illuminated gardens with musical fountains in the evenings look like a fairyland.

It is 20 kms away from Mysore Palace. The water in the dam is used for irrigation in Mysore and Mandya Districts.

Sri Venugopala Swamy Temple - Just 9 kms away from Brindavan Gardens, it is a fabulous temple on the bank of Cauvery River. 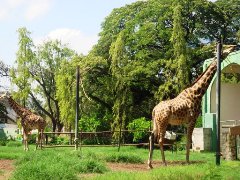 Rail Museum – This small museum exhibits locomotives and coaches of the erstwhile royal family of Mysore, and paintings and photographs describing the story of railway.

Folklore Museum – Housed in MysoreUniversity campus, this museum has a rich collection of folklore articles.

St. Philomena’s Cathedral - This twin towered church is one of the largest churches in the country with a height of 175 ft, modeled on the gothic Cathedral at Cologne and was designed by the French architects.

Chamundi Hill – The famous and ancient Chamundeswari temple is located here in the outskirts of the city and it is one of the top tourist places in Mysore.

This legendary hill, where the Goddess Chamundi is said to have killed the demon Mahishasura, to bring peace to the people, has large silver gates and golden idols. Half way up the hill, a monolithic statue of the Nandi Bull, carved out of a single black rock, is there. A gigantic statue of Mahishasura is atop the hill. 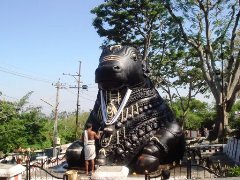 Srirangapattana – Located 16 kms away, this city was the capital of Haider Ali and Tipu Sultan. It is one of the important tourist places in Mysore. 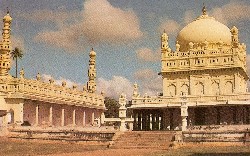 There is a Gumbaz,Tipu's tomb near the fort with marvelous black doors carved out of ivory. The fort also houses a mosque and ancient Ranganathaswamy Temple (9th century).

Ranganathittu Bird Sanctuary Located 3 kms off the main road to Srirangapattana on a group of islets in the river Kaveri, this bird sanctuary has a rich variant of water birds like cormorant, egrets and spoonbills etc. The sanctuary is mainly known for herons, who visit the islands for nesting and breeding.  This is one of top tourist places in Mysore and should not be missed.

Sri Somnathpur Temple– This is one of the three jewels of Hoysala temple architecture, situated 35 kms away from Mysore, and one of the most important tourist places in Mysore. The outer walls are carved narrating episodes from epics Ramayana, Mahabharata and the Bhagavatha.

Talakkad - This historic and religious centre is located on the left bank of Kaveri river, 45 kms away from Mysore. It was the capital of Gangas who ruled here from 5th to 10th century. Talakkad has five Shivalingas housed in lovely temples, which are worshipped with elaborate rituals during the famous Panchlinga darshan festival that occurs in twelve years.  It is one of the most important tourist places in Mysore.

Shivasamudram – Located 80 kms away from Mysore, this island town is known for its scenic beauty. It is surrounded by forested hills and valleys and famous for the two picturesque falls namely Gaganachukki and the Bharacukki, created by the two branches of river Kaveri. The other highlight of the region is Asia's first hydroelectric power project set up in 1905 is nearby. 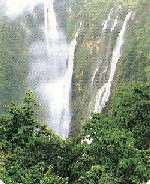 Melukote – This important centre of Vaishnavite worship, located 48 kms away, is well known for the five shrines dedicated to Lord Vishnu. The spectacular 10 day festival Vairamudi Festival is held here during March-April, attracting lakhs of devotees, to this beauty city of Mysore Karnataka India.

Both luxury and budget accommodations are available.

From Mysore to Karnataka