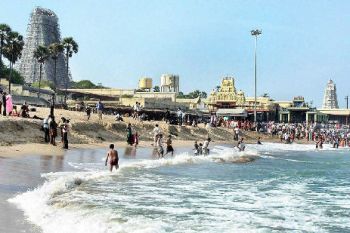 The temple is located on Chandana Hill, rising near the shores of the sea rich in pearl deposits. It has been praised in Kandapuranam as “Kanda Madana Parvatham”. All other Padaiveedu shrines are situated on hills and mounds, and it is the only Murugan temple on the seashore, bounded on the north and east by the sea.

The mighty Raja gopuram (known as Mela gopuram), with nine storeys, built in a height of 137 feet, is in the western side. The gopuram has nine Kalasams (sacred copper pots) at the top. Shanmugha Vilasa Mandapam is the main entrance to the temple facing the south, although the sanctum faces the east. The temple has two prakarams.

According to legends, it is said that Lord Murugan (Skanda) camped here along with his army and vanquished the demon Surapadma and his army, in his fortress Veeramahendram situated in the middle of the ocean here. Hence it is known as one of His “Padai Veedu” in Tamil which means the battle camp. On defeating the demon, the Lord converted Soorapadma into a peacock and a cock. The Mayil (peacock) became His vehicle and therefore Lord Murugan is also called Mayilvahanan.The festivals of the temple are attended by lakhs of people. Some important features of Tiruchendur Murugan Temple.

The last Friday of each month a procession of Senthilandavar with His consorts is held in the outer prakaram.

You may please check out this video of my trip, a revisit, to Tiruchendur Murugan Temple.

The Other five Temples in the Arupadai Veedu  sung by Nakkeerar