Srirangam Temple is located in the Thiruchirappally District (Trichy) of Tamil Nadu on an islet formed by the twin rivers Cauvery and Kollidam.

The temple is considered the first, foremost and the most important of the 108 main Vishnu temples (Divyadesams). This temple is also known as Thiruvaranga Tirupati, Periyakoil, Bhoologa Vaikundam, and Bhogamandabam.  It is also the largest functioning temple in the world. 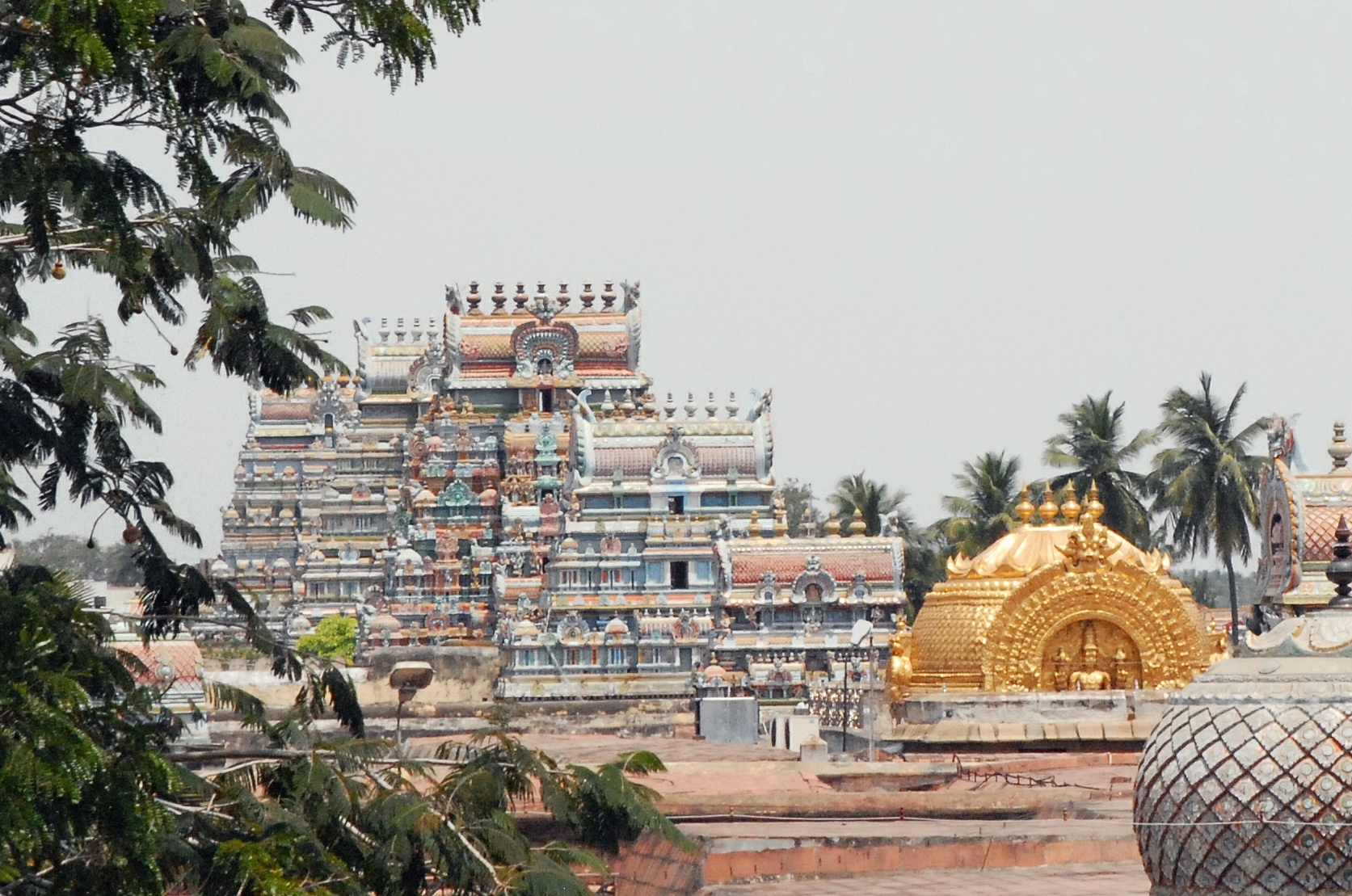 Sri Ranganathaswamy Temple, one of the most famous temples in South India,  is an enormous temple spread over 156 acres, with seven enclosures, formed by thick and huge rampart walls which run round the sanctum and holds a lot of religious and spiritual significance. It also has 21 very colourful sculpted gopurams, 50 sub shrines, 9 sacred pools, a gilded Vimana (dome) over the sanctum sanctorum of the presiding deity, and other interesting features such as fresco paintings.  This magnificent Srirangam Temple  is the only temple in India to have seven enclosures.

The mighty temple is dedicated to Lord Ranganatha, a reclining form of the Hindu deity Maha Vishnu and is built in Dravidian architecture. It also holds the unique distinction of being the foremost among the 108 Divya Desams dedicated to Lord Vishnu. Devotees visit this temple from all around the world to seek His blessings. The Srirangam temple is not merely a temple but it encompasses an entire temple town within itself. The Gopuram of the temple is made up of gold and so is protected by an electric fence.

Ranga Vimana, a shrine over the sanctum sanctorum is constructed in the shape of the symbol ‘Om’ and is completely gold plated.   Here, the Lord lies facing south, the head resting in the western direction and the legs extended towards the east.

The second enclosure contains the shrine of Ranganayaki, a form of Goddess Lakshmi. The five inner enclosures compromise the temple, while the other two serve as the settlement. In addition to the 7 enclosures and 21 gopurams, the temple also has around 50 sub shrines, a dome spread across the sanctum sanctorum of the deity, few fresco paintings, as well as 9 scared pools. A portion of the temple is dedicated only for regular sevas and activities of the Vaishnav Cult. The rest of the portion observes the human settlement filled with routine activities.

The Temple has a hall of 953 pillars which is made of granite. Intricate sculptures are the most attractive part of the hall. The Hall was built during the Vijayanagara period (1336-1565). Though the temple is said to be existing since 2nd century BC, the archaeological inscriptions are available only from the 10th century CE.

Srirangam temple boasts an historic past of great kingdom and a civilization thousands of years old.  The Hall was built during the Vijayanagara period (1336-1565). The shrine of the main gateway is 236 feet tall.

Non-hindus are not allowed to enter the gold topped sanctum sanctorum and their entry is restricted to the second prakaram.

As per Hindu Puraana, the main idol at the Sri Ranganathaswamy Temple was worshipped by Lord Brahma, the creator and was presented to Lord Indra. He in turn, gifted the idol to Lord Rama on his return to Ayodhya. Lord Rama in turn gifted this idol to Vibhishana, brother of Ravana.

It was instructed that Vibhishana must not place the idol on the ground. On his way back to Lanka, he halted at Srirangam. He had to take out the idol from Ranga Vimana, the royal chariot, and placed it on the ground. Following that day, the idol of Lord Vishnu is said to have fixed to the ground where Vibhishana had left it.

Vaikunta Ekadasi festival is among the most popular religious festivals celebrated in Srirangam, when several religious rituals are performed and devotees flock the temple to partake in the festivities.

Srirangam is a small city, but  one of the oldest and holiest cities of India. Isolated from the mainland of Tiruchirapalli

By Air: The nearest airport is Tiruchirappalli International Airport

By Rail: Srirangam has a railway station that can be reached from Chennai

Back to South Indian temples