Palakkad Attractions - Palakkad, formerly known as Palghat, is the "Gateway to Kerala," from the north, located on the border of Tamil Nadu, in the foothills of western ghats. Palakkad has an important role in the cultural history of South India. Palakkad District is known as the Granary of Kerala, with its verdant valleys, misty mountains, rivers and forests. 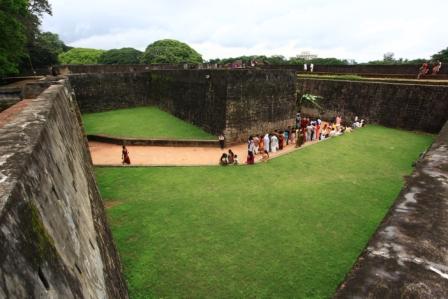 Tipu's fort is one of the main Palakkad Attractions. It is located in the heart of the city, was originally constructed in 1766 by Hyder Ali, Tipu's father, to improve the communication between Palakkad and Coimbatore, the nearby city, located in Tamil Nadu. Later it fell into the hands of British in 1784 and later to the Zamorins in 1790. Kotta maidanam, the ground surrounding the fort, served as the stables for the elephants and horses of Tipu's Army. Today the area is used for cricket matches, public meetings, circus and other exhibitions, and under the Archaeological Department. The square granite fort with its massive walls and strong bastions has a pleasant ambiance and it is worth a visit. Inside the fort, there is a temple dedicated to Lord Hanuman, which attracts lot of devotees. For the children, there is a park near the fort.

This ancient temple believed to be 500 years old is located at Jainmedu, 3 kms from the city, on the banks of River Kalpathy. The idols of Chandranathaswamy, Vijayalakshmi, Jwalamohini and Rishabhanathan are here. The temple is open from 7 to 10.30 a.m and again from 5 to 7 p.m.

These are some of the great Palakkad Attractions.

Malampuzha Dam is 14 km from Palakkad, constructed across the River Bharathapuza. Boating facilities are available in the lake. It is a great Picnic spot.

Meenkara Dam is 32 Kms south east of Palakkad. Meenkara is a fascinating picnic spot. The Dam is constructed across river Gayathri, which flows into the river Bharathapuzha.

Kanjirapuzha is 24 kms from Palakkad, is a magnificent lake. An evergreen forest, the 'Vettilachola', provides the backdrop to the lake, surrounded by hillocks.

Pothundy is beautiful picnic spot, situated on the way to Nelliampathy.

Kollengode Palace Kollengode Palace was once the capital of the erstwhile Kollengode Rajas, built in the traditional architectural style of Kerala is located 19 kms away. There is an archaeological museum in the Kollengode Palace housing murals and extraordinary treasure of Veerakallu (hero stones) of the byegone era. Olagrandhangal (manuscripts on dry palm leaves), megaliths etc. are also exhibited here.

The other attractions here are the Vishnu Temple and the poet P.Kunhiraman Nair memorial, for adventurous people, there is verdant trekking areas around Seethakundu and Govindamalai.

Water falls These waterfalls are also a part of Palakkad Attractions. Dhoni waterfall is situated 15 kms away from Palghat on the Dhoni Hills. Meenvallum water fall is around 8 kms from Thuppanad junction on the Palakkad- Manarkkad route.

Vadakkanthara Temple Here,the presiding deity is Bhagvaty, an incarnation of Kannagi, the heroine of Tamil epic Silappadhikaram. Manapullikaavu This ancient temple is believed to be swayambu (self created) and 1200 years old. Bhagavati is the presiding deity. The important festival of this temple is Vela. Temple is open from 6 to 10.30 am and 5 to 7 pm.

Kumarapuram temple Located at the banks of River Bharatapuzha, this temple once was famous for vedic learning. The presiding deity is Lord Prasanna Venkatachalapathy with his consorts Alamelu and Mangalambal. Temple time 6 to 10.30 a.m. and 5 to 7 p.m.

Thiruvalathoor Shiva Temple Located in the southern part of Palakkad, main festivals celebrated in the temple are Mahashivratri and Kartikpoornima. Temple time 6 to 12 noon and 5 to 7.30 p.m.

Emoor Bhagvaty Temple. Thirthala is located 75 kms away, on the banks of the River Bharathapuzha. It is a place noted for its monuments and historic ruins.

The Kattilmadam temple, and a domed granite Buddhist monument on the Pattambi -Guruvayoor road, is of great archeological importance. Thiruvalathoor has an ancient temple, located 10kms from Palakkad, with some fine woodwork and stone sculptures. Chathan Kandar Kavu in Ottapalam is located 35 kims from Palakkad, dedicated to Goddess Durga. The annual festival is Thalapoli, which is celebrated on Avittam day of Meenam (March or April). Kunnathu Kavu in Mundakkottukurissi, is located about 48 kms from Palakkad, dedicated to Bhagavathi. The annual festival is Vela celebrated in Meenam.

Pathira kunnathu Mana in Mundakkottukurissi village of Shoranur, is located about 50 kms from Palakkad, dedicated to Lord Nagaraja, the serpent God. This is one of the three important serpent temples of Kerala. (The other two are Mannarasala and Pambimelkavu).

Chittur Garumadam is located on the banks of the river Sokanasini (the destroyer o f sorrows). This is a memorial to Thunchath Ezhuthachan, the author of Adhyatma Ramayana, who spent his last days here. A Sri chakra, some of the idols worshipped by him, a stylus, wooden slippers and a few old manuscripts are exhibited here.

Wild life Wild life is one of the main Palakkad Attractions. Parambikulam Wildlife Sanctuary is nestled in the valley between the Annamalai ranges of Tamil Nadu and the Nelliampathy ranges of Kerala on the majestic Western Ghats, is 110 kms away. Silent Valley National Park is nestled in the lush green Kundali hills of Palakkad, is 80 kms away.