Maha Shivratri festival is one of the most important festival of India.

It is a national festival of Hindus and is celebrated throughout the country. Mahashivratri, literally means, the great night of Lord Shiva. Maha Shivaratri is one of the major Hindus festivals of India. 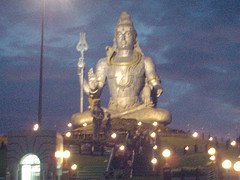 How Maha Shivratri Festival is Celebrated

This auspicious festival is celebrated on the fourteenth night of the new moon during Krishna Paksha in the Hindu month of Phalgun. It usually falls in February-March every year, and is celebrated for one day. Lord Shiva is worshipped on this day.

Special prayers are held in all Shiva temples and the devotees throng the temples, chanting "Om Namah Shivaya". The main ritual of this festival is that the devotees fast strictly the whole day and night and keep awake without sleep. The fast is broken the next day only. The Shiva Lingam is worshipped throughout the night by washing it every three hours with milk and clarified butter, curd, honey, rose water etc. and chant Om Namah Shivaya. Maharudrabhisheka is performed throughout the night in the famous Shiva temples and the following day to pay obeisance to him. Panchamrutham, made up of ghee, curds, milk, sugar and ghee, is poured on the idol of Shivalinga. Bel leaves are offered during pooja. It is believed that those who observe the Shivratri rituals devotionally will be liberated from the sins.

There are many legends about Shivratri festival. During the Samudra Manthan, the gods and demons were horrified that the entire world would be destroyed and sought the help of Lord Shiva for a solution. He saved the world by drinking the poison, but kept it in his throat and the throat became blue. Hence He got the name Neelakanth. It is believed that Shivratri is celebrated as a mark of this incident.

According to Hindu mythology, Lord Shiva appears at the time of pralaya, the final hour of reckoning. When he dances the famous cosmic dance knows as thandava nruthya, the great deluge follows, completely decimating the creation. Thus the laya is completed. He created the dance and is called Lord Nataraja and hence the dancers worship him. According to Puranas, Lord Shiva is the purusha and His consort Parvathi is prakruthi . When they both come together, vital cosmic energy is released to keep the universe in good stead.

In Kerala, Shivratri celebration at Aluva Shiva temple, situated at the banks of River Pampa, is very famous. In Andhra Pradesh, this festival is celebrated in a grand way in Sri Kalahasteshwara Temple at Kalahasti and the Bharamarambha Malikarjunaswamy Temple at Srisailam.  Someshwara temple at Bangalore and Srikanteshwara temple in Nanjangud are famous for Shivratri celebrations in Karnataka. Nataraja Temple at Chidambaram in Tamil Nadu is also very famous for this festival.

On Shivratri day, the married women pray speciallyfor the health and safety of their husbands and the unmarried girls pray to get a good husband like Shiva.

This holy festival stresses that one has to look for divinity in the nature surrounding him than in giant man-made structures.