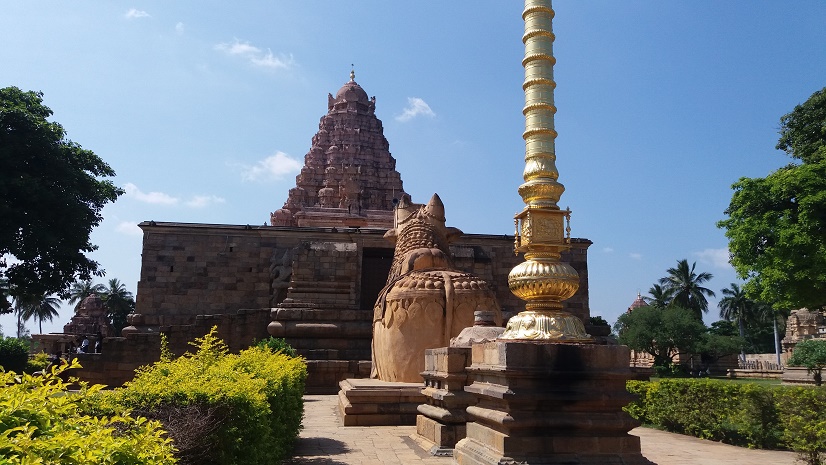 Rajendra I built the entire capital with several temples using plans and infrastructure recommended in Tamil Vastu and Agama sastra texts. However, all of these were destroyed in late 13th and 14th centuries. The Garbagraha - the main shrine  is surrounded by five shrines and a lion. The consort of Shiva Periyanayaki Amman (Parvati) has a south facing shrine.  The Nandi (bull), a ubiquitous feature in all Shiva temples is 200 meters away from the sanctum, facing the main shrine and is  made of stucco and fallen stones.  Rays of sun fall on the Nandi each day and reflect on the shrine in the sanctum. Hence the devotees can have a good darshan of the Lord even after putting off all lights, in the sunlight.

A special stone called Chandrakantha is placed under the linga with a rare power of making the place cool during summer and warmth during winter. This atmospheric specialty is not seen in other temples.

There are many bronze statues in the temple, depicting Chola art of the 11 century. The Navagrahas the nine planets are made of a single stone on Lotus design peeta. This is other rare individuality of this temple.

This temple is a living history of the Cholas in stone from the period of Rajendra-I and a beautiful gallery of Chola art and architecture. Although it looks similar to the Great Brihadeshwara Temple of Thanjavur, there are many details in the architecture which are different than it. Anyone who loves architecture can admire this temple work and spend hours together here.

Although Gangaikonda Cholapuram was a flourishing city during Chola period, it is very sad to say that today even the basic facilities near the temple are not available, except a small restaurant where you can get some basic food and juice, without much choice.  Parking is available in front of the temple.

Daily pujas are performed in this temple.

By Bus - From Kumbakonam it is just 35 kms away.  Buses are available from all major cities of Tamil Nadu.

By Air - The nearest airport is Thiruchirapalli (230 kms)

By Train - Thee nearest railway station is Ariyalur and Chidambaram.