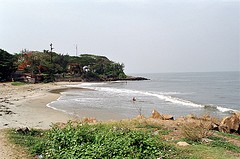 Fort Kochi is the historical part of the city and home to many tourist places like Mattancherry Palace (Dutch Palace). This Palace was built by Portuguese in traditional Kerala style called Naalukettu and presented to the then King Veera Kerala Varma (1537–65). Santa Cruz Cathdral Basilica is also here. It is a church built originally by the Portuguese and elevated to a Cathedral by Pope Paul IV in 1558 which was proclaimed a Basilica by the Pope John Paul II in 1984.  Another important thing to see here is the Chinese fishing net.

The Kerala Backwaters are a network of interconnected canals, rivers, lakes and inlets, a labyrinthine system formed by more than 900 km of waterways. It is lying parallel to the Arabian Sea Coast, with a unique ecosystem. More than 2000 kettuvallams ply the backwaters. They are traditionally used to transport things and people from one area to another.  Now houseboats, simple or top class types, can be hired to enjoy a trip through this waters. A journey through the backwaters is a wonderful experience and not to be missed.

3. Marine Drive - It is one of the most popular Cochin tourist places.

4. Jewish Synagogue - Also known as Paradesi Synagogue, this Synagogue was built in 1568  AD and is located in Mattancherry. Inside, its divine halls leaves a person enthralled with the rare antiques on display.

5. Museum of Kerala History - Located at Edapally, it is one of the oldest art and history museums in Kochi. It was founded by philanthropist R. Madhavan Nair in 1986. You are greeted at the entrance by the Sage Parsurama, the man who is said to have carved out present day Kerala. Inside the museum, you can witness historic episodes from the Neolithic to the Modern era through life-size figures.

6. Willingdon Island - It is the largest artificial Island in India. It links Kochi with other ports in the world. It is surrounded by the backwaters. This is a best place for those who enjoys serene atmosphere and the natural beauty.

7.  Hill Palace  - Located at Triupunithura, it is the largest archaeological museum in Kerala. The palace complex consists of 49 buildings, spreading across 54 acres. Constructed in 1865, it was the erstwhile residence of the Maharaja of Kochi. Hill Palace reflects the aura of the alluring region by providing a very clear insight into its cultural and historical background. A must visit place.

9. Pallippuram Fort- Built in 1503 by Portuguese, it is the oldest existing European Fort in India. The fort is hexagonal in shape and in 3 storeys in height.  It was attacked by the Dutch in 1662. A church, a hospital, living quarters and other buildings are found near this Fort.

10. St. Francis Church - Originally built in 1503 in Fort Kochi, it is the oldest European Church in India and one of the popular Cochin tourist places. The Church is well known for its beautiful structural design and ambience.  The famous Portuguese explorer Vasco-da-Gama was originally buried here.

Apart from the above, other important attractions for the domestic tourists are Lulu Mall, Wonderla and the Metro.