Badami India Caves and
Nearby Attractions

Badami India caves are located in the Bagalkot District in the north part of Karnataka, South India. The distance from Bijapur is 120 kms.

Badami, founded by Pulikesi I in the 6th centuary AD, was the capital city of the early Chalukyas who ruled this land.

It is picturesquely situated at the exit point of a ravine between two rocky hills. Four cave temples in the escarpment of the hill to the south-east of the town were carved into the cliff's monolithic stone face.

It is a treasure house for architecture and sculpture and has some of the earliest and finest examples of rock cut caves and free standing temple architecture.

There are four caves of world famous Badami Sculptures. The first cave, the oldest one, is dedicated to Lord Shiva,the second cave is dedicated to Lord Vishnu, the third cave is also dedicated to Lord Vishnu seated on his serpent couch, and the fourth cave is the smallest, carved during 7th-8th centuries, dedicated to Lord Mahavira (Jain temple). a Buddhist temple is also there in a natural cave near the ancient Bhutnath Lake. These temples were built during the reign of Chalukya dynasty. These Badami temples along with the temples in Aihole transformed the Malaprabha River valley into a cradle of temple architecture that influenced the components of later Hindu temples elsewhere in India.

Aihole - Located 110 kms away from Bijapur, this temple city is famous as the 'Cradle of Indian Temple Architecture'.

Aihole has over 125 temples, all intricately carved and rich in detail. The oldest temple here, is perhaps the 5th century Lad Khan Temple. The Durga (Fort) Temple has a semi-circular apse and a complete portico. 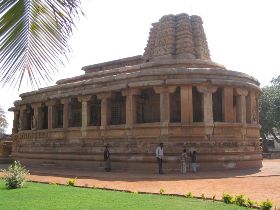 Pattadakal - Located 134 kms from Bijapur, it is a world Heritage Center with some major temples representing early Chalukyan architecture. 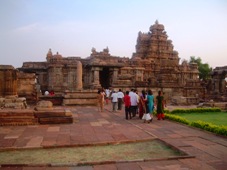 Owing to its incredible temples, Pattadakal was titled a World Heritage Site by UNESCO in 1987.

By Air: The nearest airport to Badami is Dabolim (Goa) which 290 kms away.

By Rail: Badami is well connected by rail.Luxury Train is also available now.

By Bus: Badami is well connected by bus.

Read the article Things to Do in Badami